There are safety standards in place to ensure that environmental concentrations of the hydrogen peroxide remain at safe levels. The OSHA Permissible Exposure Limit (OSHA PEL) for hydrogen peroxide is currently 1 ppm,1 which is equal to the American Conference of Governmental Industrial Hygienists (ACGIH®) Threshold Limit Value (TLV). While this concentration limit is a time-weighted average, the ACGIH® also has a short-term peak exposure, which states that at no time should the exposure exceed 5 ppm.2 These limits are very low, and intended to ensure worker safety in a compliant workplace.

Likelihood of Exposure: A Technological Perspective

Manufacturers design their systems to ensure environmental hydrogen peroxide exposures are kept to a minimum. Advanced Sterilization Products claims that use of a gas plasma phase in the STERRAD® System sterilizer process dissociates unreacted hydrogen peroxide into oxygen and water, eliminating the need for aeration. Alternately, the STERIS V-PRO® sterilizers pass hydrogen peroxide through a catalytic converter where it is reduced to water and oxygen.3

In line with environmental standards regulating exposure of hydrogen peroxide, a comparison study4 was conducted to determine the differences in hydrogen peroxide emissions for both STERRAD® Systems and STERIS V-PRO® sterilizers.

At no time should short term exposure exceed 5 ppm.2

The study was a simple comparison between four low-temperature sterilization systems – two from each manufacturer. The sterilizers from both brands are clinical in-use sterilizers. Systems tested:

The data was recorded beginning at the start of each cycle and ending ten minutes after the completion of the cycle. When the cycle was complete, the sterilizer door was opened.

A series of cycles were run on each of the sterilizers using different cycles and chamber loads to determine if these variables affect the environmental hydrogen peroxide concentration levels during and after the operation of the cycles. In addition, the runs were performed throughout a full day to simulate the potential effects of continual use on environmental hydrogen peroxide concentrations. 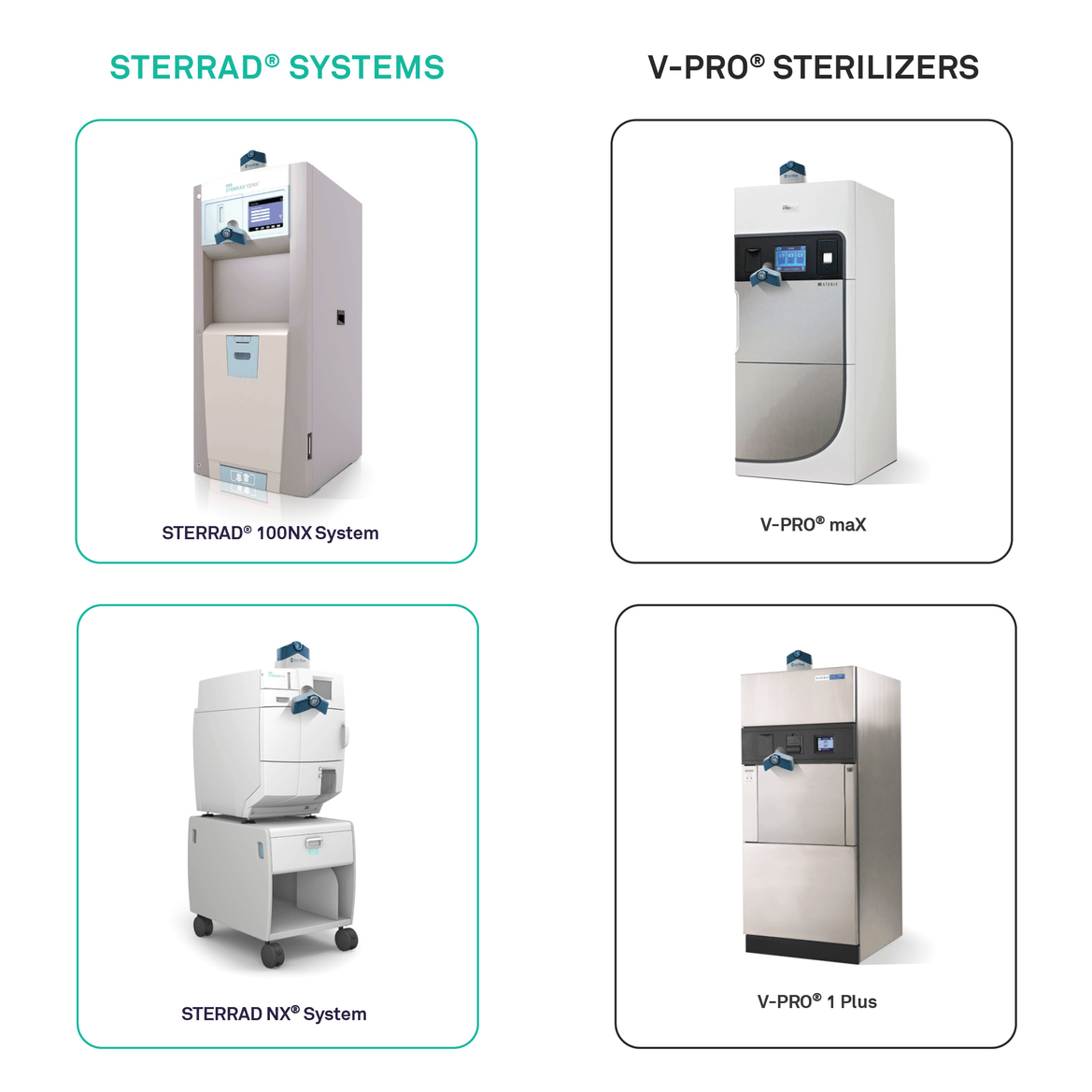 In all cases, there were no notable emissions from the sterilizers during the active cycle (the time between the start and finish of each cycle). However, there were significant hydrogen peroxide emissions measured when the STERIS V-PRO® sterilizers’ chamber doors were opened following the completion of each cycle whereas STERRAD® Systems registered close to or below the minimum detection limits of the sensor.

Spikes ranging from 5 ppm to as high as 17 ppm occurred after the chamber door was opened for the V-PRO® 1 Plus sterilizer. There was no variance noted between cycle types or when the chamber was full or empty.

The V-PRO® maX system showed concentration peaks ranging from 7 ppm to as high as 20 ppm after its chamber door was opened (Graphs 2 and 4).

These spikes in concentration are indicative of a cloud of vaporous hydrogen peroxide rising up from the open chamber of each V-PRO® sterilizer. Each spike in concentration was well above the maximum ACGIH®exposure limits of 5 ppm for short-term exposure. Sensors directly above the doors of the V-PRO® sterilizers measured these concentrations for 10 minutes following a completed cycle. Moreover, this area is in proximity to where an operator would stand to remove the chamber load.

The V-PRO® maX showed concentration peaks ranging from 7 ppm to as high as 20 ppm.
The STERRAD® 100NX System and STERRAD NX® Systems never registered a value above 0.3 ppm.

The V-PRO® maX is designed with extraction fans above the door, which are intended to reduce operator exposure to vapor. Despite this, the sensor placed on the front of the V-PRO® maX still registered concentrations following the opening of the chamber door at or above the ACGIH® a short-term peak exposure of 5 ppm in every measured case. 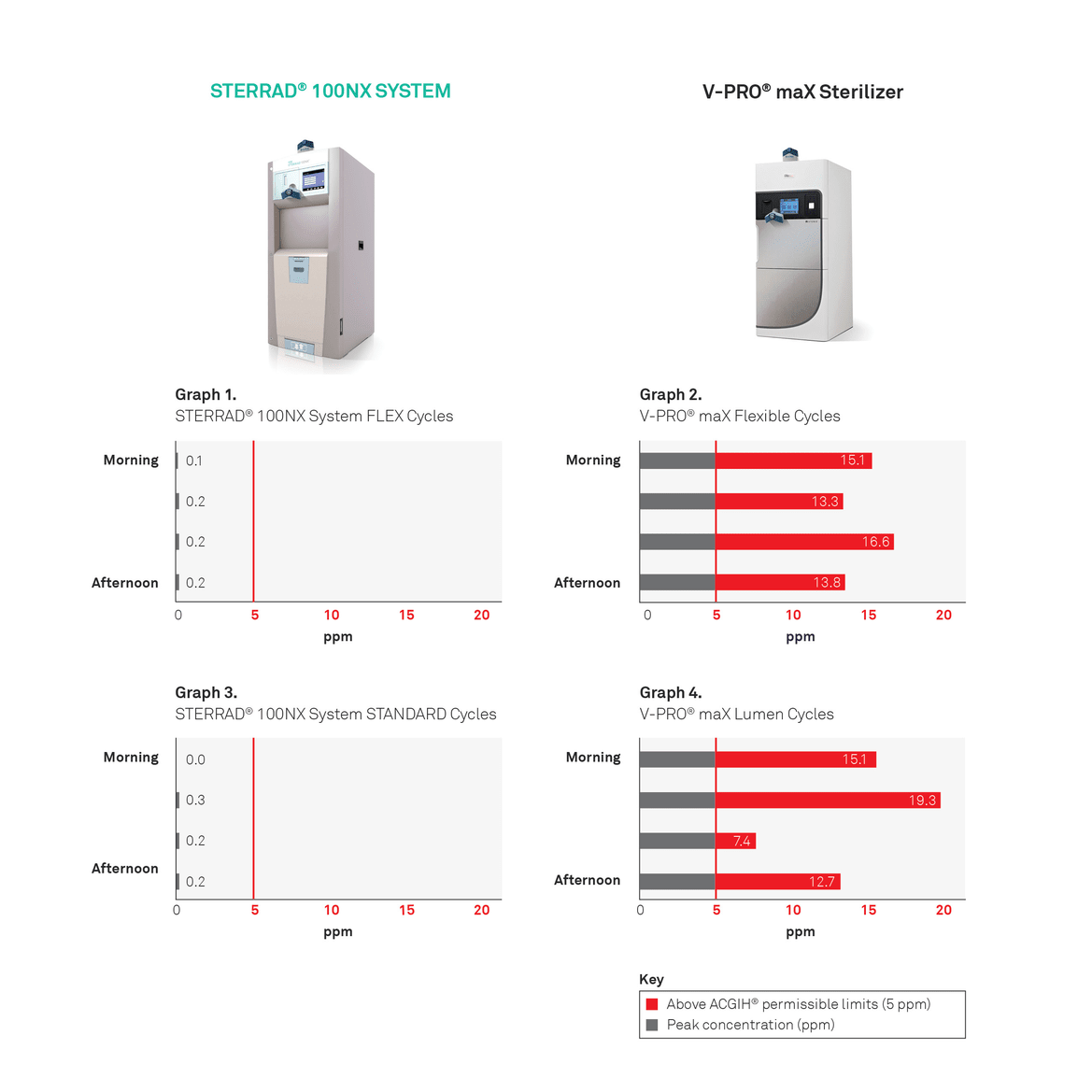 V-PRO® sterilizers H2O2 emissions ranged from 27 to 67 times higher than those from STERRAD® Systems sterilizers.

The research was designed and executed by Actionable Research, an independent third party research firm in conjunction with ChemDAQ® Inc., a manufacturer of environmental safety monitoring systems. The research sponsor was Advanced Sterilization Products. All data were collected by the ChemDAQ® staff. 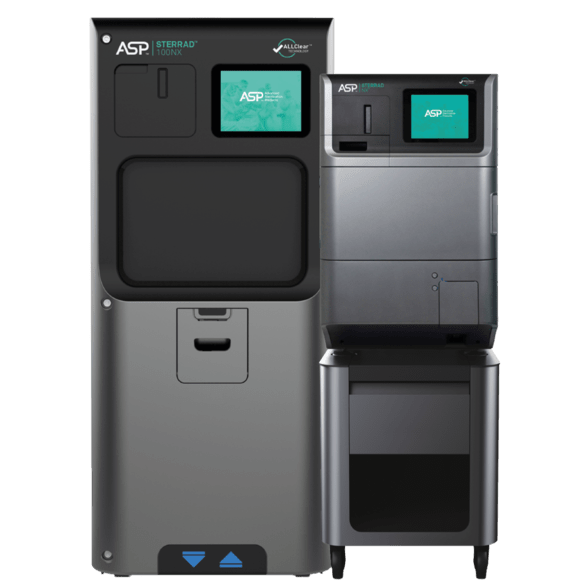